Foto's
Dolfijnreis 2002
Water
English Version
O'Pen House
DA 2008: Warm & broke
Dolphin Address 43
November 24th 2008
Actually my continental intermezzo should have been at least as exciting as my voyage out. But except for my favorite stick going down the drain, I have worked like a boulder at springtide and acquired with razor-sharp wit. Fortunately most of the time I found myself among girlfriends who knew it all much better than me, which took away the waste of worry for a while.


Both solar panels, as shown on the sneak preview in Dolphin Address 42, have been mounted, which instantly promoted me to the premier league of optimists. To invest in the Irish sun shows a rock bottom confidence in the warming of the globe.

In the same light I want to view the wallet-plundering repairs that issued from the MOT: for a new second-hand bus it’s a bargain!

Concerning the tent-behind-the-bus, the pvc-pipe skeleton is complete and the sailcloth can be fastened to the rear roof edge with Velcro. On the meadow I can always park the bus with the nose into the wind, so I can fine-tune the tent in situ.

As the solar panels provide for my electricity needs, but not for the heating of the bus, I have bought a ‘Blue Cat’ that runs on camping gas. Oddly the multilingual notice warns that the product may only be used outside. This is like an umbrella that is not supposed to get wet.

To harden myself against the winter I have covered myself from head to toe in merino wool. Truly this is not cheap, but it does endow one with a wealth of warmth. See www.icebreaker.com

Because my Nikon camera in its underwater housing takes the preparation of an entire expedition, I have bought an Olympus 1030 SW camerade for a visual scrap book. She is shock (up to two meters high) – and water (down to 10 meters deep) proof. She measures 9.5x6x2cm and photographs in 10.1 megapixels. She can also shoot videos and nicely fits into the sleeve of my wetsuit. With this I hope to capture (nearly) everything.

But what elates me most. Four years ago I bought a Dell XPS for a price for which I could fairly have bought five computers. But I was dead set on getting the best into the bus.

Who describes my disappointment after disappointment after disappointment? Not only did it rattle on all fours, the support from Dell was practically non-existent. On top of that the software I imported did hardly match. I estimate that in the past four years I have been working and waiting in vain for about a year. My Targa too had her curses, like the other way around function of the left and right mouse control. I fancied a clean slate for quite some time, but was withheld by the apprehension that a new PC would only mean another stone around my neck. 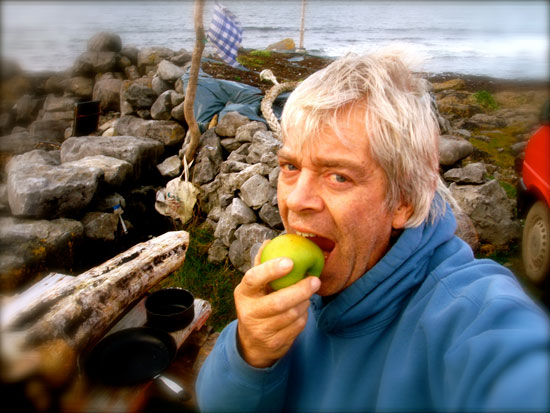 Until very recently my disdain for my digital capabilities had ruled out an Apple. It was more an impulse from my adventurous nature that moved me to enter a MacMe outlet. The argument of the salesman that both soft- and hardware come from the same producer opened up my comprehension. Two days later I bought the MacBook I’m typing this text on.

I have compared my rock running with a continuous process of problem solving, in which every result gladdens and adds to self-confidence. This same victorious feeling embraces me in my explorations on the Mac. Only one feeling of regret: I should have done this four years ago. Fortunately I do not believe in parallel realities for my imagination runs dizzy at the thought of who I could have been now.

All in all I spent more money than I knew I had and at times it felt like I was financially incontinent. But tell me now, how much warmth can 50 euro-notes give and with how many people can you share this money? For some time to come, my investments will render many options and my invitation to monitor my adventures is unlimited. So stay tuned and be kind to yourself.

Jan Ploeg, back on the meadow, November 24th 2008
back
print version