Tuesday afternoon at last the bus was ready to drive. This was not free from nerve-racking prospects either. As the man wasn’t sure about the size of the belt, he had ordered two different sizes, just to be sure. Neither fitted.

Finally he found one hanging somewhere from a nail in an attic which as good as fitted. For me to decide whether it should be mounted. If you say AA you have to slave your way through the rest of the alphabet at your own risk.

I had not yet left Greystones when again an ominous flapping sounded from under the hood. I let an eye slide over the panel in furious resignation. No illuminated hieroglyphs, but a slow and heavy feel on the wheel. At the next roundabout I knew what was wrong again this time. The bus had lost its power steering. I immediately called the garage to see if this could do any harm. Well, no, but with a 1000 km drive ahead it might leave me with numb arms.

With the heating on full power and the blower on four I continued my via dolorosa, while every little alien sound made me break out in cold sweat. That’s also why I, after two days of silence and at the top of my voice, sang down my fears together with Amy. After a number of tiring bends and exhausting roundabouts I arrived at the ferry in Dun Laoghaire. Now all over Ireland, for the tiniest villages, next to the Irish name, there is one in English spelling. But one of the largest transit ports in Ireland has a name that needs a skilled alphabetician to spell as well as to pronounce it.

Because now I had to drive nearly all night to arrive in Harwich before a quarter to eight, I wanted to take a power nap on the ferry. There was a terrific wind on the Irish Sea. I hardly slept and to prevent myself from rolling off the bench I had one hand anchored under the back of the seat and my legs spread as wide as the seat would allow. Just after three I arrived in Harwich and at a quarter to seven I was drinking my coffee again. 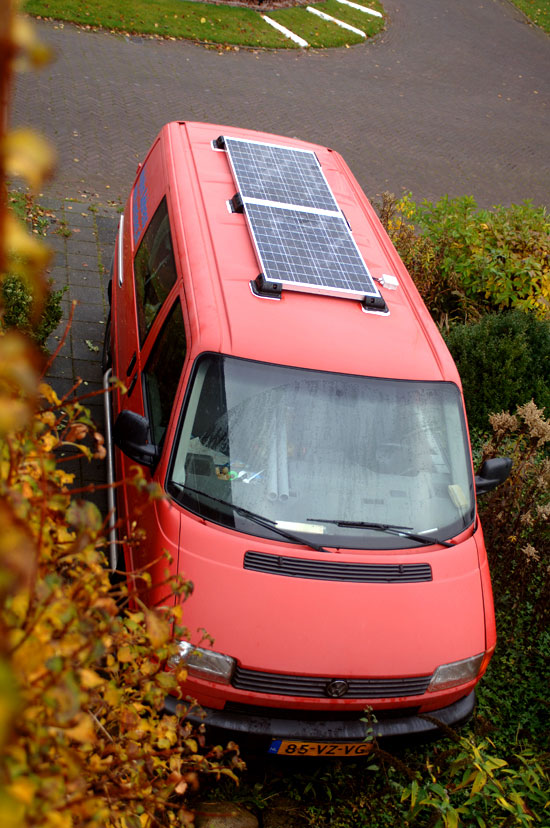 The journey passed without noticeable incidents. The dotted, striped and blocked lines drove along at the same speed as the glittering cat’s eyes.

At gas stations all kinds of ‘energy drinks’ are for sale. Mostly they have savage names like ‘Inferno’ and ‘Thunder and Lightning’ and all of them just serve one purpose: to stay awake. If you doze off a bit, you automatically hit the rumble strip and for sure, that gets you wide awake. Unassisted steering is, particularly with slow driving and manoeuvring, a rock-heavy job. It’s like driving a swimming pool.

It is almost a pity that I recently stopped smoking again, because on a direct stretch of road the bus drives so dead straight, that with both hands I easily could roll empty an entire tobacco pouch.

Still, driving is a bit like writing. Sometimes I only have to touch the keys with the lightest of my fingertips and sometimes even with clenched fists I don’t get a single idea on my monitor.

And so I make my highway between trimmed trucks and malmotorists without a headlight permit. With the power of despair I plough through the night and drudge over roundabouts and pee pause parking places. England is one multi-lane motorway with a few nasty junctions which I just don’t pass often enough to take them in my stride.

The last 20 km singularly appeal to one’s vigilance: they alternate between two and four lanes. The bus is driving ever more like a swimming pool. In Harwich, I am first. Now double up my pillow or my head will dangle from my lorry driver’s shoulders. Even before I start dreaming about everything that could have gone wrong my alarm clock goes off again.