Still my Rip Curl wetsuit was good for four years. But four millimetres on the arms and legs and six on my chest could not keep the water from leaking through the tears in the shoulders. After expert advice from Kate and George and some searching on the apneu department of www.scubastore.com I have bought a 5 mil Beuchat long john and jacket. They are made of ‘Elaskin’, a kind of stretch neoprene that ‘sticks’ so close to the skin that you first have to wash through conditioner in order to slip into it.

But what a suit! A veritable underwater tuxedo. In my old suit I could hardly stay in the water for an hour and would be shivering for the rest of the day. The day before yesterday, for the first time in many years, I was in for two hours and after that for another one and a half. I did not get cold at all and the suit super supple fits my human being.

But every benefit has its drawback and in this case I needed more lead on my weight belt. My new suit does not only have 5 mil on the arms and legs, but there where the suit and the jacket overlap 10 mil. When I weighted myself out after the divers’ fashion, floating at inhaling, sinking at exhaling, I got to 13 kg, 5 more than I needed with the old suit. But as a snorkel diver I can do with less. When underwater you swim in ‘trajectory’, buoyancy has less grip on you. The faster you go, the easier you can stay under and this is even a lot easier when you swim with great flaps, like the waterwing and the monofin. This I call the ‘trajectory effect’. I went into the water with 10 kilos, which made me a tiny bit unstable and descending was slightly less easy. Also my buoyancy was stronger.

If I go horizontal at the bottom, I can feel the pressure upon wing and fin as my suit wants to go up. If I tilt the wing upwards I both ascend and go forward. The angle under which I hold the wing determines my buoyancy speed. If I let it slide to vertical, I go up fast, but hardly forward. However, when I nearly hold it flat, I go up a lot slower, but I cover a larger distance. The latter I can keep up for quite some time, because I nearly motionless ‘hang’ behind the wing, so I save precious breath. And so you see that each drawback has its benefit as well.

By the way, I tried blowing ringbubbles on my back from the seabed. Before I swim down I first select a stem of kelp weed. Then I go over and with one hand hold on to the waterwing and the kelp stem while with my other hand I take the snorkel out of my mouth. What I generated hardly was anything like what I managed to do a few years back in a swimming pool. My bubbles mainly were a loose lot, though a rough ring shape could be distnguished. Of course I hoped Dusty would spontaneously blow perfect ring bubbles in return. She didn’t, but she did let go series of tiny bubbles from her blowhole. (For flawless ring bubbles go to YouTube, bubble rings). 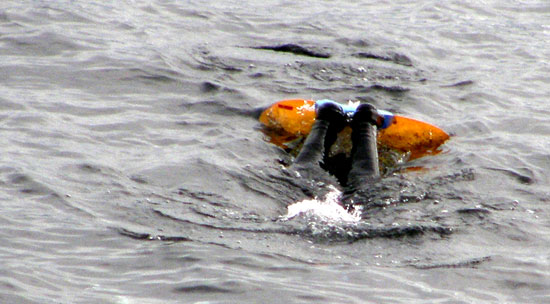 Although the visibility still does not go beyond five metres I did make some vague videos of Dusty. Because when she is in the bay she mostly hangs around the diving boat, I have tried to make the most of it. Yesterday many times she squeezed herself intimately up the mooring rope, gliding by it from beak to fluke. Today’s nicest video I think is the one where hand by hand I pull myself down the mooring rope to the seabed and she is following me with great interest.

Again I notice that she does not very much like the video camera and she is right. I am too much focussed on the camera and too little on her. Therefore the second time I did not take the camera with me and made up everything by giving her an intensive rub with a handful of sea lace.

It was nearly dark when I arrived at St. Joseph’s Holy Well. I put up my Black Diamond headlight and scooped the lucidly lit water with a cut-open two-litre milk bottle into my five-litre containers. Thereafter I went to the shoarma shed in Miltown Malbay for a Pizza Pepperoni. This consisted mainly out of chewing gum cheese and slices of fat sausage. I worked my way through two thirds and that was real work. I still feel my tired jaws.

Too beautiful not to tell. When I’m in the water and Dusty’s not there, my video camera actually is in my way and I would like to park it somewhere temporarily. The underwater housing is attached to the waterwing by a butterfly nut, so I can easily take it off. OK, but where do I leave it?
Yesterevening I walked through Miltown Malbay and on the ground saw a kid’s toy(!), a rather robust handcuff made of plastic, with a ring on it. Actually it is a piece of rope now. I was in deep water and suddenly I saw the handcuff whirling towards the sea bed. I locked in visually and saw it disappear in the kelp. I got it back, but it nearly cuffed me to the seabed. As it turned out there was an opening in de ring.

Anyway, on the back of my video camera there is a black frame that is meant to facilitate watching the monitor, but it doesn’t. So yesterevening I decided to remove it. It’s attached to the housing with a handle screw. This I turned loose.
This morning I took a closer look at the handcuff. It can be closed and locked to wrist size. To open it again you have to push a button. The piece of rope goes around the screw part of the handle screw and through an eyelet of the handcuff. On top of the underwater housing there are also two waterproof screw holes. So, the screw part through the rope knot, tighten it with the screw handle into one of the top screw holes and the handcuff is firmly attached to the housing. Now I can detach the camera from the waterwing and secure it on one of the mooring ropes so it does not drift away or is taken by the dolphin. Isn’t that ingenious luck?

Now I need to find a way to video Dusty and myself while the camera is hanging on the mooring rope.