Foto's
Dolfijnreis 2002
Water
English Version
O'Pen House
DA 2008: Sonogram from our correspondent in Lackanishka.
Dolphin Address 05
March 3th 2008
Currently Dolphin HQ, the global umbrella authority for dolphins and whales, has admitted considering the withdrawal of their Ambassador Dolphins. Reports keep pouring in about abuse, negligence, ignorance and other disrespectful conduct from humans against dolphins. Dolphin HQ has decided her motto ‘the meek shall inherit the earth’ will be abandoned. Instead, other strategies of instructing mankind will be devised and executed. This revised attitude will reflect and, where called for, exceed human aggression in order to result in equality between both species.
To this end Dolphin HQ contemplates the taking hostage of castaways and daredevils in order to trade them for dolphinarium prisoners, enslaved dolphins exploited for tourist encounters and whales whose territory is being trespassed upon and who are slaughtered for ‘scientific purposes’ and pet feed. Also she demands an immediate halt to the annual massacre of pilot whales at the Faroe Islands and the pointless slaughter of dolphins in Japan. Furthermore all fishing including nets of any kind must be banned. This list, however, is far from complete.
It has been brought to the attention of Dolphin HQ that so-called ‘dolphin medics’ are professionally recognised on completing a three-day course after which they fail, however, to distinguish between the genders of dolphins. Also practices of uncalled-for euthanizing were reported.
Dolphin HQ specifically stresses that it abolishes all contact with authorities who warn humans about dolphins and simultaneously want to ‘protect’ dolphins against humans. In general, tampering with dolphins will be regarded as a hostile act and will be reciprocated accordingly. 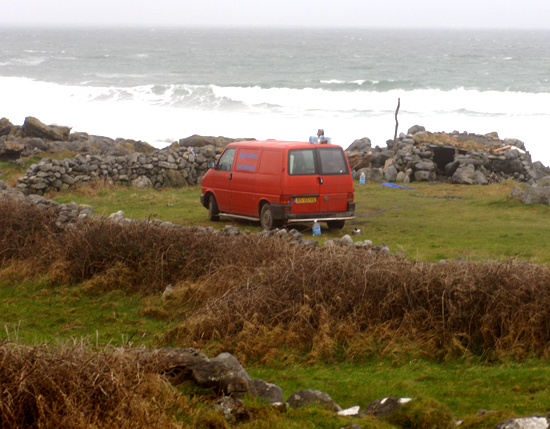 'Our correspondent on the meadow in Lackanishka'

However, in its wisdom, Dolphin HQ has decided to postpone the measures mentioned above pending the outcome of the Solitary Dolphins Conference that will be held from the 12th until the 15th of May in Dingle.
Details can be found on www.irishdolphins.com/conference
Jan Ploeg, Brannockstown, March 3rd 2008
back
print version