Lately I have the wind in my sail, but also my sail in the wind. And that is truly a battle! When the pipes are up I take the stone off the sail. The package of a square metre folds out to three by eight metres. Often the winds helps but you've got to watch it. When the sailcloth lies double across the pipes I tie the upper side to the strap that runs over the pipes on the roof. With one hand I hold the pipe and with the other I pull the sail across. When it's in position I tie the inside ropes under, over and down. OK, that's up like a barn. Now just to heave the heavy roll-stones on the front flaps and the tent is earthed.

Now it always happens to be so, that when I buy an umbrella it promptly stops raining. Selfsame when I construct a rain collector. But when I want to throw the sail across my pipe-skeleton to work out of the wind, it only begins to blow stronger. And then you feel the power and how hard it is to beat it. And even when it turns at a small angle it can make the pipe structure creak and moan.
But I have found a solution for that too. When I park the bus as exactly as I can into the wind I take care that in front of it there is room for manoeuvering. Driving rearward is no good as the lower pipes will block, but forwards the bus pulls the tent like a sledge. 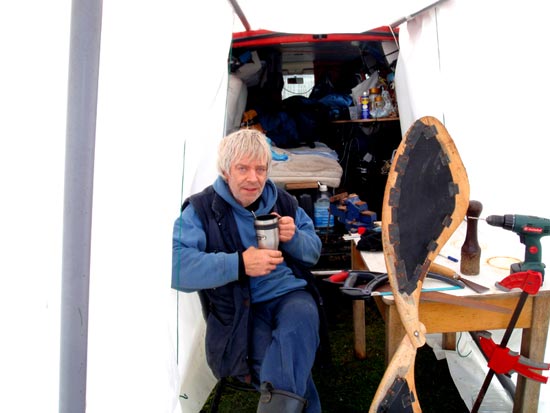 I have set up the tent four times now and yesterday even in a flying storm. It blew so strong, that even when peeing off the wind droplets were flung into my face. The tent is as if brought to life, every sigh makes its own sound. It is my very own space, hardly six square metres, which each time I have to conquer on the elements. My tent gives such a sheltered, home-free feeling, like when I was small and my mother let me play tent together with my cousin Gerrie under the sheet-covered laundry rack.
My tent also gives me a feeling of indestructibility that I know from diving, once I had my wetsuit on. It's a place out of the endless drizzle where it is almost surprisingly shielded. To work out of the wind and the rain is a luxury unknown to me on the meadow. And so cozy, it is in fact an extension of the bus and, like so often in the summer, both doors are open wide. Every now and then I take a break with a mug of tea, sitting on the head end of my mattress. From there I have a commanding view over my labourscape.

Until now I have only been sawing with a Predator by Spear and Jackson, a rusty ripper whose teeth run hungry through the wood. Ideally, you need the saw to do the job by pushing and pulling it calmly, yes almost at ease. The undertone of the saw lowers when approaching a cross cut and reminds me of a Doppler effect. Sometimes it jams and then it sings. With a little imagination you can hear a humpback in that. I love these little tricks that invent themselves, like positioning the slab in the vice in such a way that the line to be sawn stands vertically.

I am not a Christmas person myself, but inside my tent I do have a White Christmas. I wish all visitors of my website also a Merry Christmas!