In the old days it was very not done to speak in praise of yourself. We were taught that self-glorification has a foul smell. If you know not better, it feels so as well. Then you even feel embarrassed if somebody else is blowing his own trumpet. For an artist this is a professional hazard. It is not easy to present the most elated emotions in modest words.

It's been a while that a cocky little car broke this taboo. The 'Smart' was born and the spawn that calls itself 'smart' has reached a critical mass. Soon it will become so mainstream that the appeal will wither and the word will fade.

But before this happens I'd like to plant a flag upon the daily wit with which I surround myself here. What is more convincing than the proof in the pudding, what renders more certainty than something you comprehend, what gives more enlightenment than a good idea? Wisdom is better than strength, but these two are not mutually exclusive.

Now take my waste. I have a perfectly common square plastic bin that holds a garbage bag. But the wind blew off the lid the very first day and a week after it was nowhere to be found. And the bin can't go without a lid. It's outside and when it rains water collects inside. This rather adds to the weight of the bag and if it tears sludge will ooze out. Also I love animals, but not if they visit my refuse. It took a while for me to find a solution, but this one I truly feel to be 'smart'.
Of a pensioned mono fin I have nailed the feet part on a side beam of my pallet table so it is just a little higher than the bin underneath. On the fin lies a stone that makes the blade shut off the bin. If I want to throw something in, I lift the stone, the 'lid' whips up, trash in and stone up again. Behold, a 'smart bin' aka the fin bin. 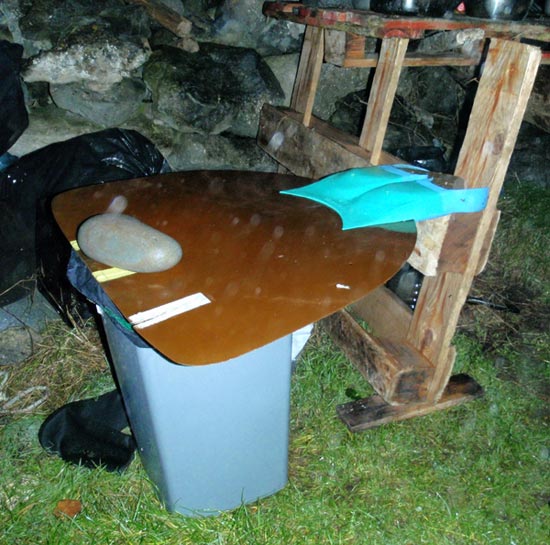 Since edition nr. 28 I have been getting my water from St. Joseph's Holy Well, just outside Miltown Malbay. That is about 40 km from here, but not only for that reason I think it a pity to use it for instance to wash the dishes. For that I do not necessarily have to use drinking-water. But I don't need to. Heaven gives. In meadows here you often see an elongated construction with a slanting surface and a trough in front of it. This top collects rain and quenches the cattle. I can do that too.
I have got this sheet of plywood positioned so that the width as well as the length is slanting. The rain flows towards the lowest corner and is caught there by a five-liter bottle. When it is filled I replace it with another empty. This 'smart water' saves me quite a haulage.

Last winter the roof of my kitchen hole was washed over twice. The devastation was very discouraging, but I simply cannot do without my kitchen. When you see the violence of whipped-up waves you would think that nothing resists nature. But like Moses parted the waters I have built a bow on the seaside of the kitchen. Whether practice will prove this theory I will have to wait and see, but I am pretty confident my 'smart cutwater' will keep things dry.

Now you may think that I smart for appreciation of my contraptions. But I have just done that myself. Ain't that smart!