Sometimes luck smiles on me in exuberance. Like when I receive yet another email cheering that I have inherited, won or can easily earn millions of dollars. I stopped falling for this a long time ago, but still. I mean, that they are thinking of me.

And then, in free association, I have to think about Amy’s pyrite song: ‘Fool’s gold’. And then I’m happy, so happy I am not a couple. Those I see loafing about the boulevard where I got stuck. Like on a decimetre deep of dragging sand, a bit further.

Then I’d rather be bored on my own.

Sometimes it seems there are no more miracles in this world. What at all am I doing in Greystones? Well, I came across the Wicklow Mountains and was looking for the coast road to Bray. I should have taken an earlier exit. No bother, plenty of time.

But then suddenly a threatening rattle sounded. Three alarm tones beeped and on my dashboard an oilcan started blinking. Also the battery icon lit up. I had enough oil and according to the VW manual the oil pressure was gone: ‘Stop immediately and switch off the engine.’ 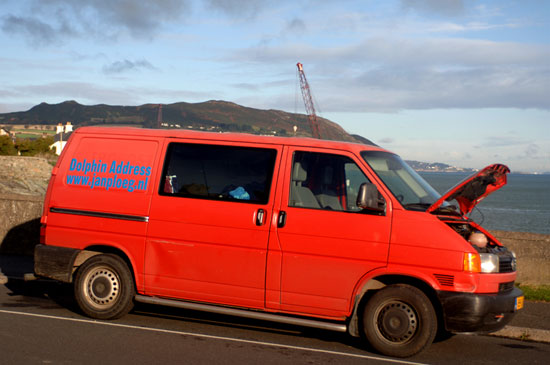 The nearest garage was 20 walking minutes away, according to a very helpful married couple of advanced age. After a substantial half hour up a hill, it turned out to be a fuel station, run by teenagers. They did not know much, except it was a bank holiday weekend, so tomorrow all garages would be closed as well. That hit hard, as tomorrow morning my ferry would sail.

Good advice might cost a fortune and so it did. I called the AA. At first they would come in one hour. Then in three hours. Then the next day, between half past eight and eight o’clock. As if it could help I was up at a quarter past six. The AA was there at a quarter to eight. For a moment I thought I was dreaming. But that was over in no time. My man established a driving belt had gone to shreds and that he couldn’t do anything about it. When I explained I really had to catch the eleven o’clock ferry he walked away a few times with his mobile phone and finally promised he would call me at nine if he had found a possibility to get a fitting belt. And if now I wanted to just sign up for membership. So that would be 200 euros.

With my head in the noose of a driving belt I had no choices left. At half past nine he called. With empty hands. When I remarked I had paid him 200 euros for naught he icily referred me to the complaint department of the AA. A banana republic it is, with downright robber barons.

And now I am to contact a garage early tomorrow morning myself.

And so it happened that this afternoon I strolled the boulevard along lots of benches that had been paid for by friends of a deceased person and bearing inscriptions like ‘Wish you were here’ and ‘A life that touched so many will never be forgotten’. It seemed to me to be a somewhat morbid way of posthumous networking.

Then a lady in shorties came out of the water. Spontaneously I decided to enlighten this soul sister with a Dolphin Address web card. She had just taken off her swimming cap and to my dismay she turned out to be a very beautiful woman. And on the spot I felt to be a dirty old man who just devised an excuse to see her change her clothes up close. But she reacted heart-warmingly friendly and when she saw my first name she introduced herself, her daughter and her daughter’s friend, whose name was Ymer. Such a break I simply cannot pass by, so I said: ‘Do you know your name means ‘yoghurt’ in Danish?’

We briefly spoke about Fanore, Dusty and Miltown Malbay, but then my caring nature got the upper hand: ‘I won’t keep you any colder, get yourself dressed.’

It could have been the beginning of a warm friendship, but though it was a perfect place it was not the right moment.

From the beach I scrambled up the grey stones. On the terrace, from where I just faced the low and blinding sun and just not sat out of the chilling wind, every now and then I caught a few words from a low voiced conversation between two girls ‘…and George was riding me like a horse’.

In the village centre lots of shops were open as usual. I did take a little detour along the garage, but it was shut tight.

A nice, ironic closing sentence, I thought. But it was Stena Line that delivered the punch line. The same Stena Line that had incorrectly booked my return journey and whom I had to pay 40 euros to set right their error. That same Stena Line called me to announce that my return voyage from Holyhead to Dun Laoghaire had been cancelled and offered me an alternative that implied a seven hour wait.

I expect to receive nothing more upon my complaint but a pre-printed text with empty excuses. So for my return trip I’m going to cram the bus full of explosives and once on the open sea I’m going to demand my 40 euros back. And I‘ll deal with the AA as well.