One of the first things I do in the morning, after coffee, is starting the bus. Then, for the time being, I can run my fingers over the keyboard, because this is how I charge the extra battery that feeds my computer. Moreover, if necessary, I can switch on the heating. While the weather is good in the daytime, it can get pretty cold at night. So mostly I can leave it off. When the engine is idling, it uses very little diesel and charges much more electricity than when I drive. Nevertheless this palls upon me.

It’s the noise, the vibrations and the stench, but I literally found something against the latter. Recently a flexible hose, about two metres long, was washed up at White Strand. The end of it exactly fits my exhaust pipes, so the stenches don’t bother me no more.
I hear you thinking now, ‘What about your carbon footprint?’ Indeed the soot spots on the meadow wash away with the rain, but they do not entirely clean my conscience. Also it does happen that I forget to flip the switch back that connects both my batteries and then I do not only type myself out of electricity, but the bus won’t start either. And then it costs me 30 euros to get it running again.

In short, an undesired situation I soon will put an end to. The first half of November I will go to Holland. The bus will have an MOT equivalent and I will have two solar panels mounted upon the roof that will generate about 150 Watts altogether. Initially I wanted to have this done in Ireland, but not only is this more expensive, but I just can’t get it done. It’s not cheap anyway, but in the long run it will pay itself back and I have the instant comfort from it. Even if I run out of power the sun, or when it’s overcast, even mere daylight will top up my batteries again. Also I don’t have to keep the engine idling with all the advantages of that. For heating a quarter of an hour suffices to warm up the bus and with a sleeping bag around my shoulders and another one on my lap I can easily stay warm. 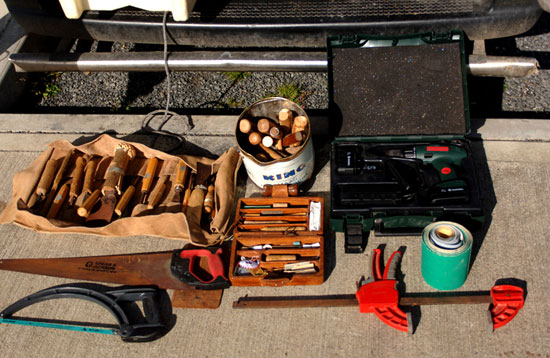 But I also have something else in mind that I want to do in Holland. In Fanore I used to have a workshop in the shed behind the shop. That for me was a welcome change, not only because of the objects I make, but also to give free reign to my thoughts. Since I’ve been asked to leave the shed, I have been hunting intensely for a place in which I can work with my hands again, but I did not really find anything better than run-down stables without electricity. A few weeks ago I got a brainstorm of the DIY kind.

On top of the bus at the sides there are two kind of small gutters. When I put a few brackets over it, I can slide pipes through them that stick out a few metres behind the bus. On both sides on the bottom of the bus there are two anti-crash tubes that I can extend as well. From one of these I will pull up thick plastic foil or translucent canvas within the open doors over the top pipes to the other bottom extension. On the meadow I always park the bus with its nose in the wind, so it will, even at considerable force, have no hold on my workshop. On the meadow I already have a table on which my vice is mounted, in which I can fix my objects. Some wind will probably come through underneath the car, but that I can block with a sheet of plywood. This way I’ll be out of the wind, out of the rain and I can get going by daylight. I already know what I’m going to make first. I have been swimming for three years now with the latest waterwing I made and have developed a number of ideas for its improvement. Meanwhile I can unveil one of them. With the construction I want to incorporate the bumps on the pectoral fins of the humpback whale.

Thus I will be better equipped to go on.