Yester and today gale force ten came in from the west. That is from the Atlantic Ocean. Odd though, when you reason about the waves that arise from it. First the wind begins to blow, from which waves originate. These catch more wind, so they get higher. Therefore they catch more wind, get even higher, etc.

According to this reasoning they would get ever higher, but they don’t. There is a limit, where the waves get so high and thus so heavy that the wind can’t drive them higher, like a break-even point. Fortunately, but how can this be? A wave has quite a weight. If you picture it as having a triangle profile, half a metre high and a base of three metres over a width of seven metres, I come to the following calculation: the surface of a triangle is base times half the height, 300 x 25 = 750 cm². This times a width of 700 = 5,250,000 cm³. One litre is 1000 cm³, so 5,250,000 cm³ divided by 1000 = 5,250 litres. If for convenience’s sake we assume the specific weight of water to be 1 (actually seawater is a little heavier), then 5,250 litres weigh as many kilos, which amounts to five and a quarter tonnes. But waves are not instantly blown to their height. This and the speed they travel with is the result of an accumulative process. The weight and speed of a wave have a ‘free-wheel’ component once it’s on its way. One could say the wind keeps the fire burning. Moreover, a wave is not a solid mass, but a flow that yields to massive obstacles. 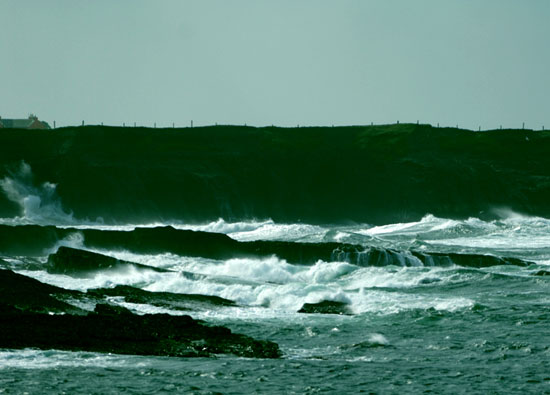 Enough arithmetic. I went into the waves and there everything seems different because now you’re part of the ongoing process. You are not languidly pushed forwards and upwards by a high wave. When you swim against it, first you get sucked up to the top and when you pass over or through it you drop into the wake which drags you down. If you lie in as streamlined as you can, you stay about on the spot of that moment. So it is important to time your strokes well because then you go forward. The way back, with the waves, these are the same, though the timing is different. I position myself as close to the surface as possible as there the waves have their maximum force. I lie too deep in the water to get myself pushed forward by one wave, like a surfer. They overtake me and I want to take as much advantage of their energy as I can. When I feel a wave approaching with my feet, I tilt the monofin upward and push along with it, first with only my feet and when it reaches the waterwing I tilt it down for to utilise the same energy a second time. When I feel I have arrived in the wake of a wave I take a rest to prepare myself for the next one.

It is a tremendous view from the water to see a wave towering up before you. For a moment on top you have a panoramic view and then you tumble into the next wake-dale.
All this may sound very dangerous, but if you keep away from the rocks water can hardly hurt you. I don’t get seasick anymore, which saves a lot of misery.

Yesterday I was also doing a bit of bodysurfing with the waves. I got regular pushes from behind that sent me forward some ten metres at a time before I knew it. Suddenly Dusty appeared at my side. I had not expected her at all, so I was twice happy. She glided next to me as if her body knew no resistance. Then she laid herself across before me and wanted to be stroked. I was most willing to do this and nearly everywhere, except for her flukes which she meticulously kept out of my reach. I thought it splendid, far out, savage and cool to pamper the dolphin in these high waves. Sometimes we bumped into each other, but she did not seem to mind as she stayed with me. I even had the impression that she amused herself more than average. Today she did not show up. Still that does not make me sad. I count my blessings; I count them one by one.