Foto's
Dolfijnreis 2002
Water
English Version
O'Pen House
DA 2008: Das Boot
Dolphin Address 27
September 19th 2008
When, as usual, we leave the water far too frozen, Jacky motherly pops her head over the half-door of her camper: ‘Would you guys like a hot drink?’ We nod in shivers, grateful and hastily strip off our wetsuits in the rain and a biting Northern wind. A fat towel later we warm our hands and faces to a scalding mug and swiglets of hot coffee warm their way to our insides.
Ian is on cloud nine. As none of us has a spare wetsuit that can take his build, he went into the water in his mere shorts and, for the first time, with a snorkel and a mask that he borrowed. He does not stop talking about the underwater weed gardens and the fish swimming among them. The last and first time Ian went into the White Strand water he did not know about the dolphin and when suddenly she surfaced close by, he jumped out of his skin.

Kate parks the battered Toyota on the nearly top parking spot. Maggie, who is on the verge of changing into her wetsuit, decides to walk her dogs first, so Kate can have Dusty for herself a while. We all know she has to work long and irregular hours and we are thoughtful of each other.

I wrote before about the togetherness among dolphin swimmers with Fungi in Dingle. For several years the Dusty-swimmers were a loose bunch. We had a nodding acquaintance. What social rapid has brought us together? 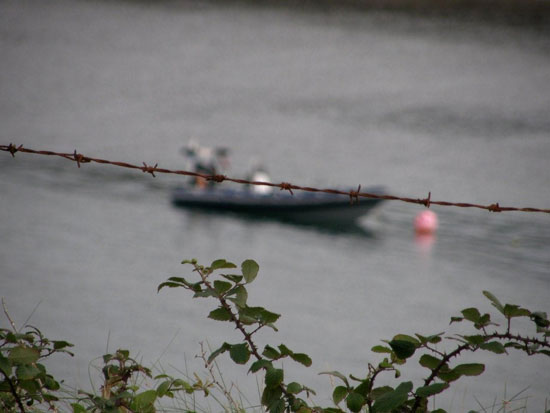 When I returned from Holland in July, for a while I did not want to believe my eyes. Ute, whom I have mentioned to be someone who spends more time in the water than the dolphin, Ute, who has always had a fierce disapproval of boats, who planted a notice that warned against taking toys to Dusty 'No Toys!', that Ute chug-chugged over the water on a glorified, motorised air mattress with Dusty on her track. For a moment I wanted to believe she had only borrowed it for a single trip, but it soon became clear that she had bought it.

Now Ute has always had a habit to swim far out to have Dusty to herself, so I feared what even went worse. Dusty was eager to follow the boat and stayed, with Ute, away for up to four hours.

Soon Dusty’s behaviour began to change. Ever more she aimed her attention at boats. Until recently she followed the boats that take out diving parties to the entrance of the bay and then returned. Now she stays with them all the time. Ute claims these take the dolphin out and goes in pursuit to win Dusty for herself. Even though she says that she swims with her out there I have only seen her criss-crossing about through my Leica Ultravid 10 x 32. To swim with Dusty has become a matter of hasty flybys and the response of the dolphin has plummeted accordingly.

A week ago a gale came in and by way of precaution the boats that were moored in the bay were taken out of the water. Then the damage done became sadly apparent. Various times we saw Dusty swim into the bay from buoy to buoy, looking for a boat. None being there she’d swim away, ignoring swimmers she had known for years.

My spirit sank as well. Traumatic memories welled up of how Fungi in Dingle was spoiled so badly by boats that finally, in 2001, he did not come to swimmers anymore at all.
At long last I swam up to Ute and lashed out my fury on the consequences of her action. She arrogantly scoffed me and bumped her boat against my head.
Yestermorning I saw someone swimming in the bay and my binoculars revealed it was Ute. I kept a close watch on her and saw Dusty with her twice for a short time. Apparently Dusty is no longer interested in her without the boat. And thus ‘das Boot’ bounces.

And that’s what happened. No new videos or photos, only a sad story that took a long time to write into a Dolphin Address.

In a slight breeze, Ute needs a passenger to keep the boat stable. We could put up a sign at the slipway: ‘No Ute! Boats are highly addictive to dolphins. Do not spoil your own and everybody else’s swim by becoming Ute’s counterweight.’