Foto's
Dolfijnreis 2002
Water
English Version
O'Pen House
DA 2008: The ‘Veenmeer sandstone quarry’
Dolphin Address 24
Juli 20th 2008
This afternoon I went for a swim in the ‘Veenmeer’, or, like I used to call it for many a year, ‘My Private Waterhole’. But now it had been at least five years since I took a dip there.
What differences! To mention a few, if in the sea you swallow a gulp of water, this is so salty you nearly have to throw up. The ‘Veenmeer’ water is that clean and fresh that I freely let it flow into my mouth. I called this ‘swimming on the inside’.
The sea is always moving, the ‘Veenmeer’ is tranquillity itself.
In the sea you see mostly kelp weed. In the ‘Veenmeer’ this is significantly thinner. I used to call this ‘Pubic Weed’.
I do not even contemplate going into the sea without a wetsuit, but for a weighty reason I had not brought it with me. This left me no alternative but to go in in my togs. I am not childish about that. First I wet my wrists and throw some water on to my neck; then I run in. For a moment I have to recover from the sudden chill, but soon I get used to it and go back to ‘The Little Beach’ to put on my mask, get my snorkel in on the left and into my flippers. I brought neither my monofin nor my waterwing. Ryanair does not allow them as hand luggage and they are too vulnerable to trust to the freight handling.
In the old days I named all the prominent spots in the ‘Veenmeer’. This was adopted and charted by the management so divers could better plan their routes. As usual I went in from ‘The Little Beach’. In the old days you could enter the water anywhere, but thereafter only permission was given to dive at the far end of the lake.
The ‘Veenmeer’ was used by a number of diving clubs to exercise and for taking exams. When you go deeper, water does not gradually get colder. Particularly where there is no current the temperature goes down in shifts. The difference in temperature is called the thermocline. As dive training for a significant part consists of ascending, the thermoclines are breached. In this the dust from the bottom rises through the thermoclines and keeps hanging there for a long time. Not only does this worsen the visibility, but it also blocks the sunlight. The latter in considerable measure stunts the growth of weeds and thereby also that of the fish stock. This is clearly visible at the far end of the lake. The bottom there has been reduced to the original, sand.
But this is also apparent in the ‘protected’ areas. The growth of weed has recuperated in a fashion I recognised from 20 years ago. Dense bunches of weed tower here and there and are abundantly inhabited by centimetre-fishes, alternated with sandy bumps where freshwater mussels have gathered. In the last of my diving years there was only one spot like that left, which I used to call ‘Mussel City’. This was situated in ‘The Garden’, a higher ledge some three metres down and about 15 metres from the shore. To my surprise I was seriously investigated by an eel the size of a wrist that stuck out 30 cm from the weeds. I circled around it, but it hardly moved. When I dived to the same spot again it had gone.
From the end of ‘The Garden’ I always dived to the shore along the bottom. This served as a measure to calibrate my ability. Same this time and I nearly made it, but that was because I had not brought my usual gear. Along the shoreline looking for pike between the reeds, via ‘The House’ where the litter had been cleared, along ‘The Corner’ to the ‘Crayfish Wall’. I only counted one pair of antennae where formerly crayfish were teeming. I skipped ‘The Shallows’ and went straight to the ‘Tench Corner’. Alas, no one there. At the ‘Turtle Bath’ under the ‘Kingfisher Branch’, the bottom looked also uninhabited. So the entire far end was sand, where huge shoals of perch and redeye extract their food from the dust stirred up by divers. At the ‘Chrieto plateau’ some hesitant weeds were growing and at ‘The Cove’ it had recovered fairly.
The visibility was about two and a half metres, which is reasonably good for the ‘Veenmeer’. At ‘The Restaurant’ now a fleet of pedal boats had been moored and the bottom looked as dead as a doornail. I remembered that at ‘The Frontal Strand’ there was a weed garden at about five metres, but I was too chilled to go that deep. From there I put on a final sprint to ‘The Little Beach’ and was awaited by a cutting wind. Half frozen I put on my clothes, only warmed by the thought that ‘The Veenmeer’ still is an attractive lake. I may not have seen pikes, but instead there were hundreds of little fishes in all sizes. There is plenty of food for pikes so without any doubt they will probably be hanging around. I’ll go there again when the sun shines and the wind is not as cold. But that is nothing new. For over ten years I have been diving there summer and winter and chilled myself into gooseflesh, so this tradition was done justice.
And this was as far as it went. The weather did not permit any more, so the water became an inside event. But this too to me is a rare luxury. 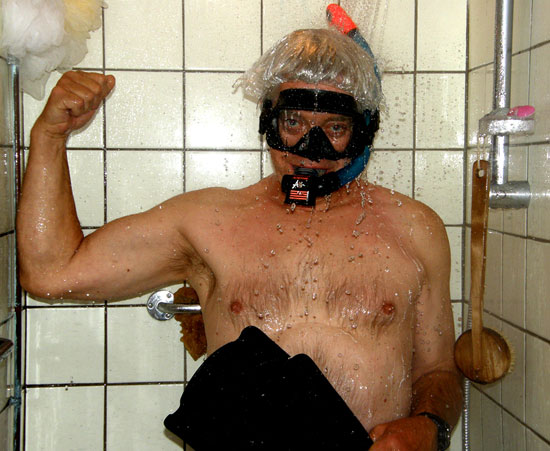