Foto's
Dolfijnreis 2002
Water
English Version
O'Pen House
DA 2008: Diving
Dolphin Address 17
June 11th 2008
So this afternoon I made another attempt to take my diving bottle into the water. Although it was quite a struggle to get into my ‘new’ monofin, at last I succeeded. Puffing and panting, I made for the seabed. The bottle rather slid over my head and rolled from one side of my back to the other. What did I do wrong? I pulled the belt a lot tighter. The bottle still was way too high, but at least it stayed on the middle of my back. Next time I will string the bottle belt through under my weight belt, then it’ll stay in position.

Gradually my breathing calmed and the pleasure began. Where normally I only have a limited stay now was there in plentyfold. Lovely open spaces bordered with various weeds and suddenly she was there. Dusty. She circled around me as if I was a nonpareil. I saw her thinking, what are you doing here, don’t you have to go up for air, are you to stay here for good???
As if she could or would not understand, she swam off to one of the many Sunday canoes. I consulted my compass and so headed exactly into the wrong direction. Upon and in the sand miraculous life comes to light. Tiny gurnards, only discernable when they moved because of their perfect camouflage, a small plaice, also merging in the sand that flapped away in surprise when I wanted to take a closer look, centimetre-fishes that hung in dense shoals above and among the kelp, innumerable formations of sand eels and so much more beauty that this sentence would become unreadable because of its length.
Because I cannot find my diving computer again I did not know precisely how deep I was, but compensating for the second time told me it would be about 10 metres. I went up for a spy hop and saw a number of buoys, indicating some sort of contest. An inflatable with an outboard motor came in my direction and someone in it shouted: ‘Hey you, come here!’
Buy a dog and bark yourself, I thought and tumbled down again. 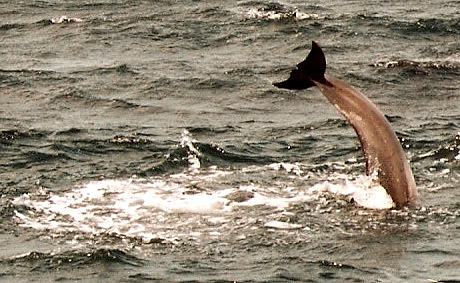 This far Dusty pushed herself out of the water with her pectoral fins, photo Kicks van der Burg
How gorgeous this truly is. Because I don’t have to go up for air I can keep up my speed and the momentum of the bottle lifted me through the backwash.
I swam until knee-deep water and rose, grabbed in the collar by gravity. The boat came towards me, but meanwhile I stood in ankle-deep water and the conversation could only be conducted at a distance. It amounted to that what I did was very dangerous because no one could see where I was, so I could be run down just like that. I retorted that I could hear motorboats from far away and, as far as the contestants on the body boards was concerned, I could see them approaching. Moreover I have surfaced under surf- and body boards on my own air before, so that was a trifle. Their authority drowned before their very eyes and they hurried away to boss somebody else around.
Jan Ploeg, White Strand, June 11th 2008
Photobiography
During a 9 day stay my good friend Kicks van der Burg has documented
my life and love in Ireland with 484 photographs. If you ever wondered
about my existence, here is the answer in all its wealth and beauty.
All my favourite spots are there and so much more that you will feel
like you have been here yourself. Check it out on
www.picasaweb.google.nl/kicks53